‘We Need Each Other’: Seniors Are Drawn to New Housing Arrangements

After her husband died, Freda Schaeffer was left on her own in a three-bedroom house in Brooklyn. “I was lonely,” she confessed. And she worried about finances, because “there’s a lot of expenses in a house.”

Tom Logan, who had moved east from California, found that his disability payments from the Department of Veterans Affairs didn’t stretch very far in New York City. “I needed a place to stay, or I could be homeless,” he said.

Enter the matchmaker, a home-sharing program operated by the New York Foundation for Senior Citizens. It pairs people who have extra living space — but want company, help with chores, extra income or all three — with those desperate for affordable housing.

Over nine years, the program has found several carefully screened guests, as they’re called, for the spare bedroom on Ms. Schaeffer’s second floor. Mr. Logan, who moved in a year ago, has become one of her favorites.

Together, they watch the evening news and “Colombo” reruns in her living room, said Ms. Schaeffer, 89. “We discuss what’s going on in the world. And he loves animals.” Indeed, Mr. Logan, 63, is studying to become a veterinary assistant and helps feed the feral cat they’ve named Cali, for calico.

“Freda and I are family now,” Mr. Logan said. “We need each other.”

As a graying population confronts the limited options for senior housing, seeking ways to maintain independence without the isolation that can accompany so-called aging in place, various grassroots alternatives are gaining footholds.

Shared housing, cohousing and village organizations appeal to those hoping to avoid the high costs and institutional nature of assisted-living and nursing homes, or at least stave them off for as long as possible.

Though these approaches date back years, “we are seeing a resurgence of people wanting different models of housing,” said Kirby Dunn, executive director of HomeShare Vermont. “Living alone isn’t all it’s cracked up to be.”

A primer: Shared housing matches people who have unused space with people who need housing; typically, at least one party is age 60 or older. Sometimes the arrangement involves simply rent and companionship, but sharers can also agree on lower rent in exchange for grocery shopping, dog walking, driving or other services.

About 100 such programs once operated around the country, Ms. Dunn said, but they proved difficult to sustain. A few years ago, the number had sunk to about 35; now it has rebounded to 50, with established groups like Ms. Dunn’s getting inquiries from people hoping to start new ones.

Though home-share agencies run an array of background checks and work to ensure compatibility, the prospect of a stranger moving in can still provoke uneasiness. “People are living together in unsupervised settings with access to the checkbook, the medicine cabinet and the family silver,” Ms. Dunn acknowledged.

Unsurprisingly, home-share programs attract many more would-be tenants than householders willing to open their homes. HomeShare Vermont has just 60 matches going at a given time.

But tenants paid an average of $300 a month last year (one-bedroom apartments in Burlington typically go for $1,500), and surveys showed that more than 80 percent of participants reported feeling happier, safer and less alone.

Cohousing functions differently: A like-minded community forms, then looks into acquiring land and building a housing complex (or occasionally, converting a building) where members can live together.

Though their homes are smallish, residents also share a common house for communal meals, classes and meetings, plus gardens and outdoor walkways designed to encourage socializing.

“The joke is, in cohousing you go check your mail and you’re gone for half an hour,” said Karin Hoskin, executive director of the Cohousing Association of the United States.

Most of the 170 self-governed cohousing communities that already exist (another 140 or so are in varying stages of formation) are multigenerational.

But 15 have organized to serve older residents specifically, including communities in Virginia, Colorado, California, Oklahoma, Washington and West Virginia.

More are coming. Organizers have purchased land for senior cohousing in Tulsa and suburban Boston; the first cohousing development for L.G.B.T. seniors is under construction near Durham, N.C.

Alan O’Hashi, 66, a documentary filmmaker, and his partner moved into the architect-designed Silver Sage Village cohousing community in Boulder, Colo., in 2008.

Though he enjoyed living in the 16-unit development, which like most cohousing communities operates legally as a condominium, Mr. O’Hashi didn’t become a true believer until 2013, when pneumonia sent him to a hospital and then a rehab facility. He came home in a wheelchair.

“All of a sudden, people were bringing over food and calling to check on me,” he recalled. “It’s the secret sauce of cohousing, this notion of community, of shared values.” 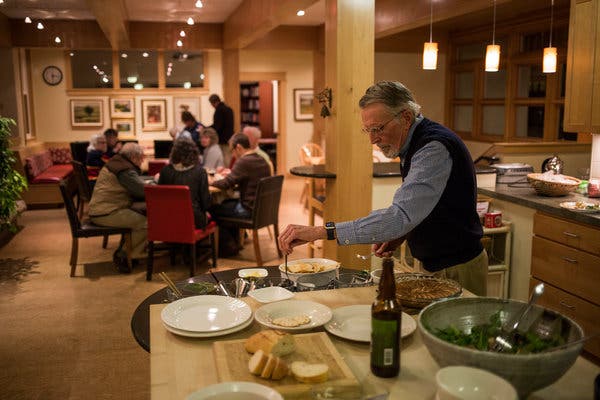 The newest and most vibrant innovation, the village movement, comprises 280 organizations in towns, cities, neighborhoods and even apartment complexes, and is growing by 20 percent a year, said Barbara Hughes Sullivan, national director of the Village to Village Network.

Members must pay annual dues, $250 to $450 on average, and villages hire a coordinator to oversee services. Topping the list is transportation, via volunteer drivers, taxis or ride-hailing services.

Judy Rosen, 94, lives in the 10-year-old village Mt. Vernon at Home, which has 180 members in Alexandria, Va. She has always enjoyed its lunches, lectures and museum trips.

But she recently stopped driving, so she now also relies on its volunteers for rides to the supermarket and doctors’ offices. “You know that if you need something, you have a place to turn,” she said.

None of these new approaches can solve the crisis in affordable supportive housing for older adults, of course.

For one thing, these new options are too small. The New York Foundation for Senior Citizens has run a home-share program for nearly 40 years, but last year matched just 49 hosts and guests. It is using more than $2 million in new city grants to expand its reach, but “it’s slow going,” said director Linda Hoffman.They also require considerable volunteer effort. Organizing a village takes about two years, Ms. Sullivan said; for cohousing, it is three to seven years.

And despite attempts to keep costs reasonable, these alternatives can get expensive. Village memberships can climb toward $1,000 in some locations, with discounts for lower-income residents.

Finally, there’s the rubber-meets-the-road moment. Cohousing or village neighbors can offer lifts or bring meals, but they can’t help a frail older person take a shower. At some point, residents in declining health will need home care or a long-term facility. Freda Schaeffer, for instance, relies on daily aides.

Still, if more groups try out these programs, and if government and nonprofits provide support, older adults could remain in their communities longer, with stronger social connections.

In villages, “you’re still able to be active and part of the community,” said Ms. Sullivan of Village to Village Network. “And you have a sense of a caring group of people beyond your family. It’s very cool.”